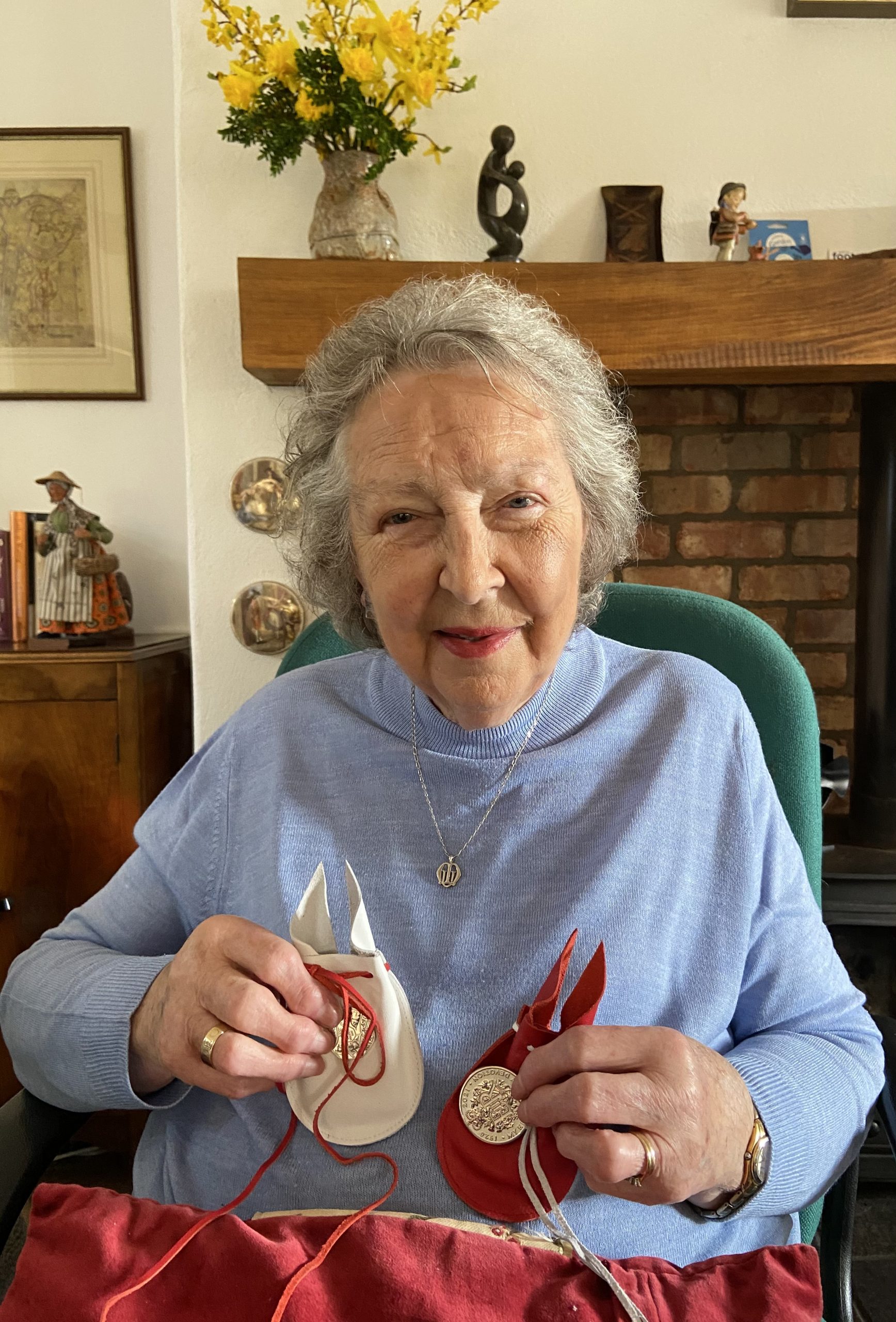 Many congratulations to Paddy, a member of All Saint’s Parish Church Mothers’ Union Branch, who today received the gift of Maundy Money from Her Majesty the Queen.  By tradition, Royal Maundy takes place every year on Maundy Thursday. For more information on the Maundy Service click here.

Speaking about receiving the Maundy Money, Paddy said she was very excited; “I was quite overawed. I did not expect it in the slightest. I am very honoured”.

The recipients are chosen from the local community and, in normal times, distribution of the Royal Maundy Money takes place at a different cathedral each year.  Sadly, due to the Covid-19 pandemic, Paddy did not have the opportunity to receive the Maundy Purse in person as, in keeping with arrangements last year, it has been sent to recipients in the post.  Receiving her Maundy Purse in the mail is not quite the same as taking it from the hands of Her Majesty. “I would have loved to meet the Queen, and I am sure I could have managed to travel in a wheelchair, but it is just lovely to have received the honour,” Paddy said.  Paddy is currently on crutches following a hip operation. “This has really boosted me for I was feeling a bit down,” she said.

Paddy has been a stalwart of Mothers’ Union for many years and has held various posts within the organisation most notably as a former Connor Diocesan President and All-Ireland President.  She said much of her work in the local community came about through the Mothers’ Union. “We have been involved in community organisations that support families, and others are continuing that work”.

Sally, Connor Diocesan President said “I am absolutely delighted with this news.  It is a great pity that Paddy was not able to meet with Her Majesty due to the pandemic, but nevertheless, this is an honour which she richly deserves.  Paddy has been a wonderful example to all in Mothers’ Union and is still very aware of everything that is happening in the organisation.  She is held in very high regard and it has been a real privilege to serve with her during her time as Diocesan President and then All-Ireland President.”

Paddy was nominated for the Royal Maundy Money by the Bishop of Connor, the Rt Rev George Davison. Her citation reads:

“Paddy has been an active member of the parish of All Saints’, Antrim, for many years. Over those years she has served diligently and humbly in a number of roles. She is well-known throughout the diocese and the whole Church of Ireland having served firstly as Connor Diocesan President, and then as All-Ireland President of the Mothers’ Union. In these roles, she endeared herself to many across the island with her unique blend of warmth, encouragement and professionalism.

“At the first parish branch meeting after Paddy was elected as All Ireland President of the Mothers’ Union, she told the members that her most important role was still being a member of All Saints’, Antrim, Mothers’ Union.

“This is but one example of Paddy’s humility. Over the years she has exercised a ministry of encouragement and hospitality to her vicar, and other clergy and many of the parishioners.  Even when holding high offices in the Mothers’ Union, she always found time to fulfil many more everyday commitments in the parish such as arranging the Flower Guild.

“Paddy’s working life was that of a teacher. In the 1980s she was promoted to the role of vice-principal of Parkhall College, Antrim – one of the three secondary schools that then served the town. As such, she was a member of the senior management team that raised the school from being Antrim’s third-ranked secondary school to first position in the same rankings.

“An enlarged Parkhall is now the town’s sole secondary school and it is thriving.  Its success is largely due to the foresight of that senior management group, to which Paddy made a significant contribution.”

On behalf of everyone in Mothers’ Union, we send our congratulations and best wishes to Paddy!