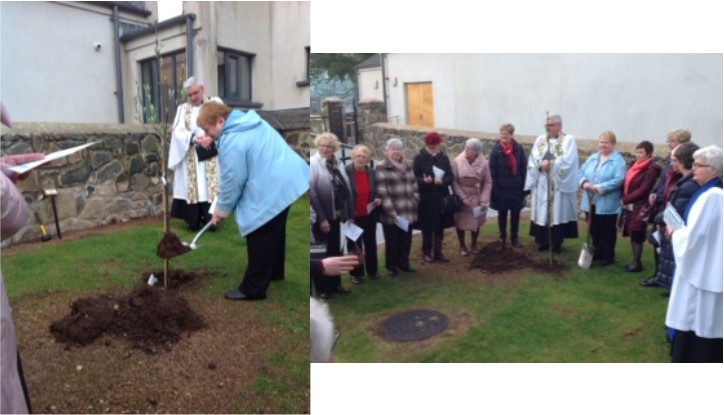 On Tuesday 2nd April our new Diocesan President had the pleasure of planting a Rowan tree in at Holy Trinity, The Diamond, Ballycastle. This was the tree to mark the 130th Anniversary of MU in Ireland. Trees have now been planted in all twelve dioceses in Ireland. The 13th tree is depicted on a piece of stained glass in Christ Church Cathedral in Dublin. The trees represent 13 decades of MU in Ireland. Trees were planted to acknowledge Mothers’ Union being rooted in prayer and faith and reaching out to our communities through our branches and members.

Along with the tree, Sally placed a pendant which belonged to Mrs Pat Mayes, who was the General President of the Mothers’ Union in Ireland 1977-1983. It represents her committed leadership and that of many others in the MU.

The tree planting was followed by the North Connor Area Service; a very meaningful service of Holy Communion conducted by Rev. David Ferguson. The sermon was given by Diocesan Lay Reader, Mrs Sharon Wilson. She spoke about the various qualities of different trees. We too have different qualities and talents that we can bring to Mothers’ Union.