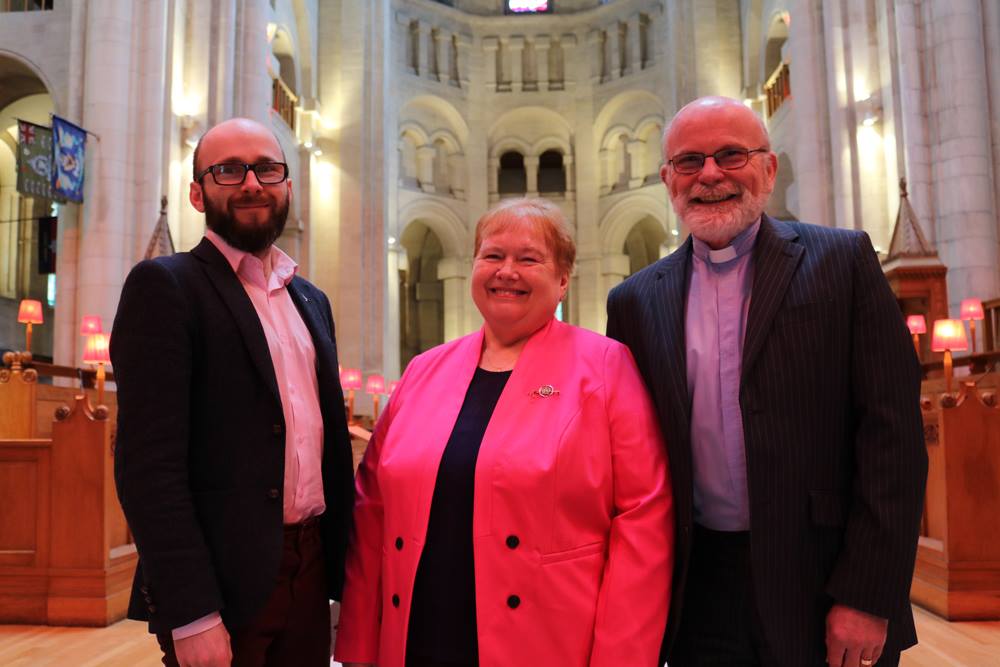 The preacher was the Dean of Belfast, the Very Rev Stephen Forde. Worship was led by the Cathedral Choir. The readings were by Lyn, Mid Connor Area Secretary, and the Rev Dr Bob Cotter, husband of the new President. The Prayers of Intercession were led by Joyce, Faith and Policy Unit Co-ordinator, and Irene, Diocesan Secretary.

Banners for all Mothers’ Union Branches in Connor Diocese were carried in procession and presented to the Diocesan Chaplain before the service and carried out again in procession at the end.

Sally, a former primary school teacher, has been a member of the Mothers’ Union since 1989 and has held posts at all levels.

Her first branch was St Nicholas, Carrickfergus, where she was branch young members rep; area education rep. She was on the Prayer and Spirituality Unit and in 1996 was appointed Diocesan Marketing Co-ordinator.

In 2001 Sally became All-Ireland Marketing Co-ordinator and in 2007 was appointed to the Marketing Unit Committee at Mothers’ Union headquarters in Mary Sumner House.

She was a Diocesan Worldwide rep from 2007-2013, and since 2013 has been Vice-President of Fundraising and Communications in Connor Diocese.

Sally joined the Broughshane branch of Mothers’ Union in 2010, when her husband Bob became a curate in the parish of Skerry Rathcavan and Newtowncrommlin, Broughshane.

The couple met when they were both singing with the St Anne’s Cathedral Evening Choir in 1979. Sally was an organist in First Lurgan Presbyterian Church for five years and in Holy Trinity Parish Church, Woodburn, for 13 years. She currently plays in Donegore Parish and has been a church organist for 30 years.

She ran a Mothers’ Union choir in Carrickfergus for 21 years. Named ‘Sally’s Singers,’ the choir sang all over Ireland, north and south, and raised money for charity.

Sally has been a trustee of Carrickfergus Home-Start for 20 years and has also been a Sunday School Superintendent and a Girls’ Brigade Officer.

Sally taught in King’s Park Primary School in Newtownabbey for 31 years before taking early retirement. She and Bob have one son, Christopher.

Report as it originally appeared on the Diocese of Connor webpage on Monday 8th April 2019.